AWS Terraform and Wireguard - part one

In my last post I worked with AWS CLI and Cloudformation to create a simple VPC and find a configuration drift.

In this post I’ll show you how to build a VPC in AWS with all the elements necessary to lab Wireguard. We’ll use Terraform to automate the creation of the VPC.

To complete all the labs in this post you need an AWS account , an EC2 key pair , basic Linux skills, and AWS CLI optionally.

Terraform is an IaC tool that supports AWS and many other providers . For some uses it can be an alternative to AWS Cloudformation.

Wireguard is a new-ish VPN software that will be merged in the Linux kernel soon. It is widely appreciated for its peformances and easy to configure.

The first step of our journey is the installation of Terraform .

We can use WSL on my Windows 10 or any flavour of Linux.

Avoid using snapcraft to install Terraform, the release is v0.11.11, we’ll use v0.12 that has a different syntax .

We can verify the installation running

Creating a VPC with Terraform

The creation of the VPC and all the necessary elements requires some AWS skills. I will not discuss in detail the details of how AWS VPC works here. For anyone interested the topics are included in the AWS Certified Advanced Networking - Specialty training.

We start creating a Terraform configuration named awswire.tf. This file will contain the definition of the AWS infrastructure.

Another file named variables.tf will provide all the variables and their values.

I advise to keep code and variables in separate files for reusability, readability and to avoid sharing private information/credentials by mistake.

The file awswire.tf will include 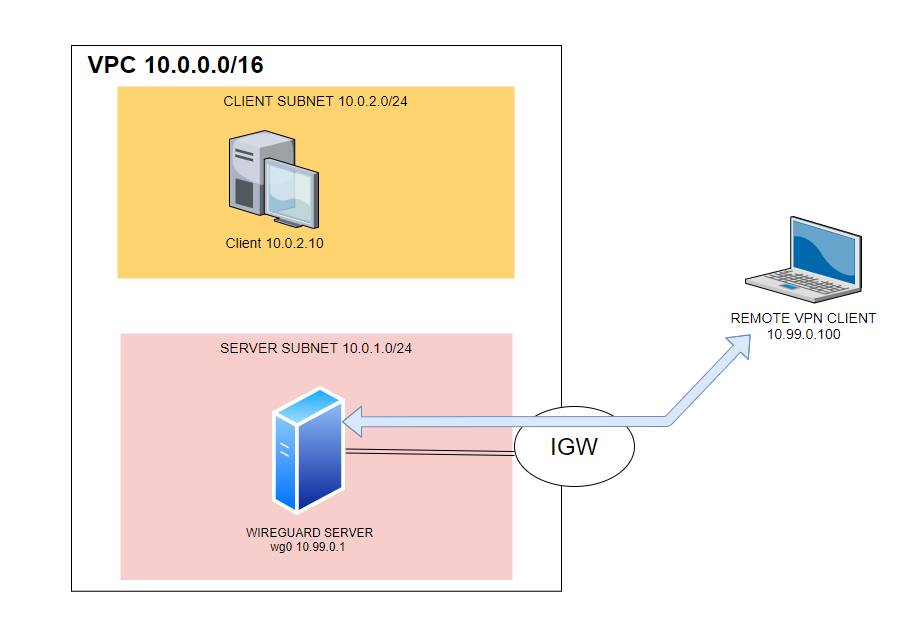 The files are long and inlcuded comments for all the sections to make them readable. They are available in my GitHub account .

This is the part that creates the VPC

This creates the private subnet

You got the idea. All the details are in the docs about the AWS Provider .

Edit variables.tf with your AWS credentials and favorite region

Now we can initialize Terraform

Verify the changes that will be applied running

Verify you’re working in a test AWS account to avoid any impact in a production infrastructure.

See it in action

Now we can login to AWS Console to verify the results or use AWS CLI , using the commands below to start

to remove all the resources created in AWS and avoid unexpected billing.

If you prefer to use env vars to store AWS credentials for Terraform, instead of using variables.tf, create a new file named ~/aws.export.env and edit with your credentials and region

Assign exec permission to the file

And activate it running

This command mut be run again every time a new terminal session is created, or after a reboot. Add the same lines in ~/.bashrc if you want to set the env vars permanently.

Last step: remove the provider section in variables.tf, it is not necessary anymore

We’re done with part one of this post. The VPC is ready to use.

Stay tuned for part two where we’ll install and configure Wireguard to provide a secure access to the private EC2 instances in AWS.