A few days ago a customer called worried by the flow control counters increasing on his Cisco 4510 switch, he just sent me this asking for an explanation:

Flow control is not rocket science, wikipedia explains it clearly, the concept is: if you’re receiving more data than you can handle ask the sender to take a little break, if you receive a pause request be polite and stop sending data for a little while.

In our case the counter increasing fast was TxPause, that means the switch is receiving more data than it can handle.

Is the switch dropping packets?

We can check it with the command:

and look this counters:

In this case all the Rx-No-Pkt-Buff were zero.

So the switch is not dropping packets, that is good.

We can say that since the sender is pausing from time to time it’s not getting the full throughput it could reach so we have somehow a bottleneck or at least non optimal network performances. In this case the ports are connected to iSCSI storage and the counters were increasing during backups at night.

Why is it happening?

The source cause is the switch module architecture, in this case a WS-X4548-RJ45: 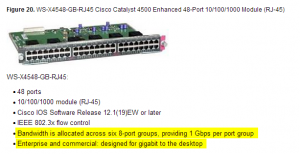 We can see that this module has six group of 8 ports sharing a 1Gpbs ASIC per group, that is a 8:1 over subscription. So if the total received traffic of the eight ports reaches 1Gpbs the switch sends TxPause frames (if configured to do so) or eventually drops the frames when the buffers are full.

How can we fix that?

The first way is to distribute the links that are more likely to send or receive larger amounts of data in different port groups, served by different 1Gbit ASICs:

Since in this case there are many port channels, we distributed the links on different port groups and modules.

The second solution is to replace the 8:1 oversubscribed module with another module WS-x4748-RJ45-E that is non-blocking:

We should not forget to check the switch backplane to spot another possible over subscription point, in this case a WX-C4510R-E. The architecture of the chassis provides 24Gpbs per module:

Even with a 48Gpbs port non blocking module, the over subscription from module to chassis would be 2:1. Just be aware.

The last step is the supervisor. This chassis has a Sup7-E that provides up to 848 Gpbs so there’s plenty of  space to grow:

Devices architecture is often seen as a topic for presales/network designer. Post-sales network engineers tend to focus on the CLI skipping all the boring slides full of numbers.

In this case knowing the architecture really helped to understand and explain a potential problem.