Console access to devices for a network engineer is almost as important as telnet/ssh access. Usually an usb to serial adapter is required since almost all laptops don’t have a serial port. I must admit that a dual or quad serial adapter is in my Amazon wishlist ;-)

I looked for wireless serial adapters, both bluetooth and wifi, and I even thought to build one myself with RaspberryPi . My final choice was Airconsole , now it’s time for a review.

What’s in the box? 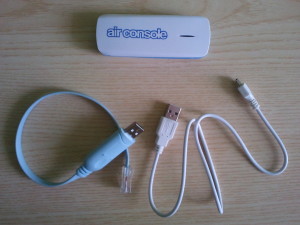 The unit is battery powered, it has a button on the side to check the charge:

On one side there’s the USB port to connect the serial adapter:

On the other side a RJ45 port to connect it to the network:

The last side has a mini usb port to charge the battery:

How it looks like when connected. The DB9 adapter is not inclued in the standard kit , the pro kit includes two adapters and a license for the getconsole server.

So how do we connect to the device? It has a web interface for the configuration, see the manual for details, and is RFC2217 compliant so any virtual serial software should work. I’ve tried one from HWgroup and it works.

The software setup is quite easy and well explained on the manual, there’s no need to repeat it here.

The serial access speed depends on the quality of the wifi connection. I set it to channel 13 since it’s not used in most environments, if the laptop has poos signal the lag on the console can be a problem.

I did some tests of the wifi signal in my house:

Signal in the same room:

The results are not a surprise, a small battery powered device with integrated antenna can have just a good enough wifi coverage. It is intended to be used inside a server room or datacenter, so the performances are good for it.

The Airconsole can be used as access point too, just remember to disable the internal DHCP server to avoid conflicts in your local network.

Since I’ve an iPad I took the chance to test the GetConsole app from the same producer of Airconsole. GetConsole can connect to the Airconsole but the coolest part is the connection sharing, it is possible to access the serial session on the iPad via the Getconsole website:

This looks a great solution to remote support field engineers, I’ll show this to my boss since it may save us a lot of time for some installations.

I didn’t had the opportunity to test the Airconsole in field yet but I’m very satisfied so far. I think It will save me from walking in the datacenter with my laptop to get access to the console of the devices (or use a very long cable) I’ll just find a comfortable place to sit and move the Airconsole where needed.

As stated in the website the software is under development and more features will be added in the future, like support to multiple serial adapters (via usb hub I suppose).

Five stars to Airconsole and Getconsole!

Note: my review is not sponsored, I paid out of my pocket for this product.