Cisco stopped to publish CCIE statistics some time ago but in Cisco Live presentations we can find some slides like this: 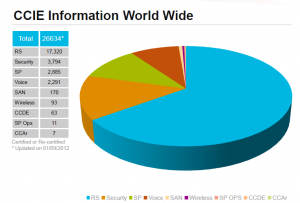 A couple of days ago on twitter Bob McCouch  who passed his lab on February 21st posted this:

I know 14 days are not enough to make statistics, but let’s play with the numbers since they’re very fresh.

There’re 9 CCIE lab locations worldwide , suppose each lab locations ha 5 seats per day. I say 5 because on the online schedule of the lab I can’t find a single day with more than 5 seats available, maybe they are more.

If 177 candidates passed in two weeks that means a passing rate of 40%, quite higher than I expected but not knowing the number of seats that’s hard to say.

So first myth busted: are CCIE numbers pre-allocated? I would say no, that would mean aroud 11k new numbers per year and since latest CCIE numbers are around 38k that’s not possible.

Take for example Marco Rizzi , he got his digits in February 2011, number 28129. With 11k pre-allocated numbers per year they would have reached almost 50k now .

Another proof of that: David Rothera passed after a re-read, he got a higher number than Bob ’s who passed the lab earlier: 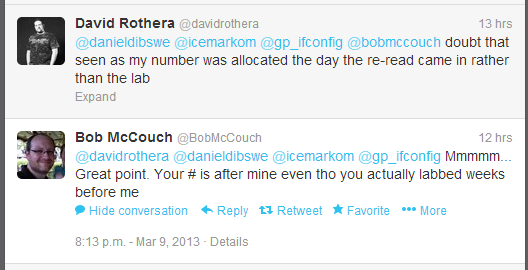 Is the CCIE still a certification for an elite?

IMO the answer is yes.

Numbers are growing fast, but can they keep the pace of the growth of the networking market worldwide? Definitely no.

Like many other jobs in IT, the demand is growing faster than the offer, higher skills are still rare so the certification wort any minute  and money spent to achieve it.

I’ll update this post if any correction/update is required, feel free to reply here of on twitter .